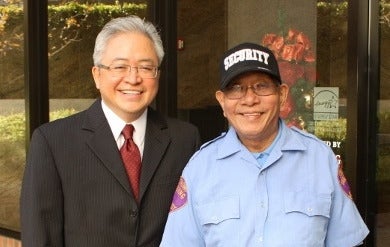 ERNESTO SALAMANTE, 73 years old, worked for eight years as a security guard for a business in Downtown Los Angeles. He lived 24/7 on a trailer that the employer provided for him so he can guard the work premises round the clock. However, despite working long hours and without a reliever, the employer failed to pay him overtime

Ernesto retained the services of the Law Offices of C. Joe Sayas, Jr. to claim his back wages. The case quickly caught the attention of the legal community due to Mr. Sayas' use of a then novel legal theory, accusing the employer of engaging in elder financial abuse against its senior employee by failing to pay its employee properly for all hours worked. By invoking California's Elder Abuse Act, Mr. Sayas was able to make claims for additional damages on behalf of Ernesto. What started as a claim for wages became a more serious case of elderly financial abuse. In addition to wages owed. This legal strategy opened the way for claims of emotional distress.

The employer aggressively defended itself, as it filed petitions before the Court of Appeals and the Supreme Court. However, the employer lost all legal issues it raised before the appellate courts. The employer eventually agreed to settle the case for $425,000, an unprecedented amount for a blue-collar position.

“One of the things that helped is that Atty. Sayas spoke Pilipino. I could easily communicate with him about the many questions I had. He was able to address my concerns in a way that made me feel confident that I will be taken care of. And he really took care of me and my wife. We are very grateful for all his hard work and for the satisfying results he obtained for us.”