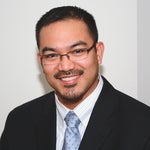 Karl P. Evangelista, Esq. is an associate in the Law Offices of C. Joe Sayas, Jr.  He is admitted to practice before the courts of the State of California, the Commonwealth of Massachusetts, and the United States District Court for the Central District of California.  Prior to beginning his practice in California with the Law Offices of C. Joe Sayas, Jr., Mr. Evangelista was an associate attorney in the Boston firm of Messing, Rudavsky & Weliky, P.C., a leading Massachusetts boutique firm representing employees and unions in labor and employment litigation.

While in law school, Mr. Evangelista clerked at the General Counsel's Office of the International Union, United Automobile, Aerospace and Agricultural Implement Workers of America (United Auto Workers), in Detroit, Michigan.  He also worked as a legal intern at Catholic Charities, Refugee & Immigrations Services, in Boston, Massachusetts, where he counseled and assisted indigent families and individuals on immigration matters, as well as a law clerk at the firm of Messing, Rudavsky & Weliky, P.C. prior to graduation.  Mr. Evangelista was also selected, for his first law school summer, as a participant in the American Bar Association's Judicial Intern Opportunity Program, and worked as a judicial intern for the Honorable Patrick J. Walsh in the United States District Court, Central District of California, in Los Angeles.

Mr. Evangelista's practice is focused on labor and employment law, and litigation.