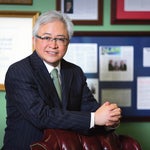 Recognized as one of California's top employment and labor law attorneys by the Daily Journal, C. Joe Sayas, Jr. has devoted his more than 30-year litigation career to protecting workers' and consumer rights. He has fought for employees discriminated due to disability, race, or sex, including thousands harmed by employer wage theft in both individual and class actions.

In the civil rights area, his efforts led to significant recoveries in labor human trafficking and police misconduct cases.  Seeking justice for consumers, he successfully prosecuted serious personal injuries, insurance bad faith, and unfair business practice actions against insurance carriers and big businesses. Fighting the David v. Goliath battles, he and his team had obtained recoveries exceeding $150 million for clients and their families.

As lead class action counsel, Joe Sayas challenged the Long Beach port trucking industry practice of classifying its drivers as independent contractors.  He successfully obtained a court judgment holding that his client drivers are employees, and helped create a fund of $11.04 million for 500 drivers. This is the highest wage class action recovery for port truck drivers in the port's history.

Joe Sayas' efforts did not stop with the monetary recovery. He fought to have the companies reclassify the drivers to become employees, further resulting in a long term favorable impact at work. The unlawful deductions on drivers' wages ended when they became employees. More importantly, the workers later obtained health insurance, paid leaves, and retirement benefits. Several companies in the biggest port in the country followed this change into the employee model, resulting in benefits to more workers.

In her Order, the Hon. Beverly Reid O'Connell, judge of the US District Court in Los Angeles concluded that the result was an “exceptional recovery”, and noted the significant time and energy that the Sayas Team “skillfully devoted to this case”.

Recently, Joe Sayas led negotiations in a settlement that resulted in a total of $21,557,000.00 in back pay and taxes for over 500 workers. The settlement was reached at the 11th hour before a jury trial in a Los Angeles federal court. The case was heavily litigated by five Plaintiffs' firms and two prominent defense firms.

In recognition of his advocacy for the rights of the underprivileged and the minorities in the courtroom, Joe Sayas is 2018's Presidential Awardee for Outstanding Filipino Overseas. He has been recognized as a Super Lawyer by the Los Angeles Magazine for 10 years. He has also received the Community Champion Award from the Philippine American Bar Association, and the Justice Award from the Migrant Center.

Joe Sayas earned his legal degrees from Georgetown University Law Center and the University of the Philippines. He has traveled extensively with his wife of 34 years, and their two wonderful children.